The site where Her Majesty’s Theatre now stands was first purchased in a government land sale by George Porter for £100 in February 1839. Little development occurred until the gold rush boom years of the late 1850s. By 1858, the site was fully occupied by various merchants and offices. From about 1880, a large open air entertainment venue known as the Hippodrome was in place, with the entrance off Browns Lane (now Cohen Place). The Hippodrome was known mainly for equestrian shows, circuses and the like.

Around 1884, the site attracted the attention of property developer Jules Francois de Sales Joubert. Joubert was born in 1824 in France. He arrived in Australia in 1839 and made a career building houses and later, staging exhibitions in Australia and overseas. In 1884, he returned to Melbourne from India with a substantial sum of money to invest. The Hippodrome site was now owned by the grandson of George Porter, the original 1839 purchaser. Joubert secured a 30 year lease on the site and immediately began construction of a block of thirteen three-storey houses with shop fronts along Exhibition and Little Bourke Streets. In the centre of these buildings, he built what was, at the time, the largest theatre in the Southern Hemisphere. Joubert employed a young architect, Nahum Barnet, to design the new complex. After an education at Scotch College and the University of Melbourne, Barnet established his own practice in 1880 and was to become one of the most prolific and long-serving architects in Melbourne in the late 19th and early 20th centuries. 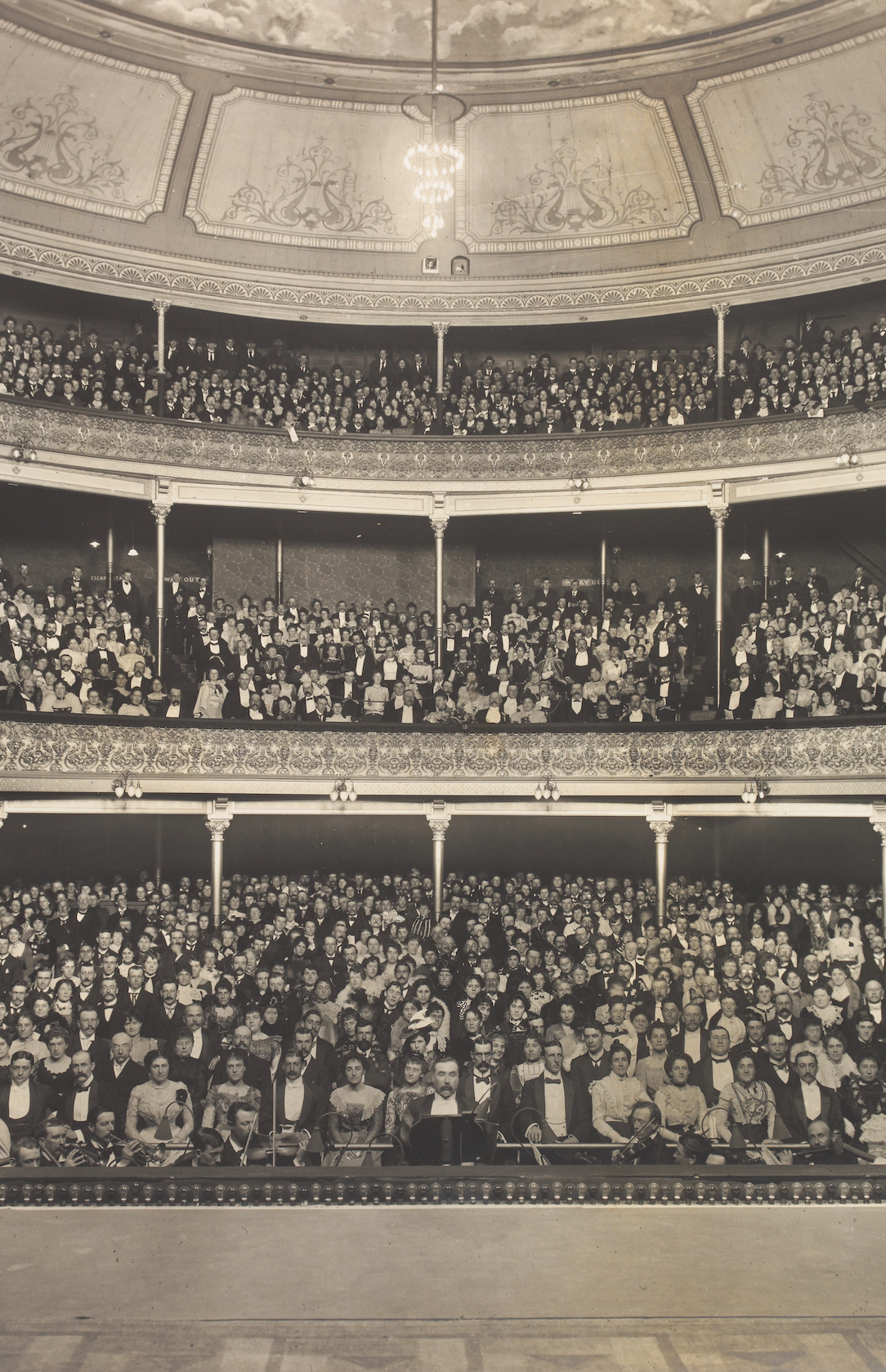 After an outlay of £40,000 (£15,000 over budget), the theatre opened on 1 October 1886. Joubert named it the Alexandra, after the then Princess of Wales. The theatre and shops were collectively known as ‘the Alexandra Buildings’ and the theatre was affectionately referred to as ‘the Aleck’. The symmetrical Exhibition Street elevation was of face red brickwork with rendered detailing, with the central entrance defined by a raised mansard roof and a distinctive semi-circular window over the doorway. Early illustrations show the building without a verandah; a cast iron one was soon added to the Exhibition Street frontage. The seating capacity was made up of approx. 1,080 in both the Stalls and Dress Circle sections and another 600 in the Upper Circle – a total capacity of nearly 2,800.

Joubert had hoped to open with a season of Italian opera, but the actual presentation was a rather low-brow comedy called Bad Lads. Within a year, Joubert had become insolvent, resuming his earlier career organising exhibitions. Over the next 14 years, the theatre had various directors and managers. A successful formula was found, with popular melodramas being a staple fare for the late 19th century audiences.

James Cassius Williamson first came to Australia with his wife in 1874 as an actor under contract to George Coppin. He formed his own theatre company in 1880 and in 1882, entered into a partnership with Arthur Garner and George Musgrove, which became known as the ‘triumvirate’.

The company opened the new Princess Theatre in Spring Street in December 1886 and brought to Australia various internationally famous performers, including Sarah Bernhardt. After the partnership was dissolved in 1899, Williamson decided to end his association with the Princess and move to a new venue, securing a lease for the nearby Alexandra Theatre.

Williamson’s first decision was to refurbish the building. He commissioned William Pitt, the architect who had created the Princess Theatre, to design renovations to update the theatre’s image. After initial minor refurbishment, the Alexandra Theatre was renamed Her Majesty’s Theatre, after Queen Victoria, and re-opened on 19 May 1900. More substantial works were carried out later the same year to increase foyer space, which had always been limited. Under Williamson’s management, the theatre prospered, running a long succession of shows, including seasons of opera and musical comedy. 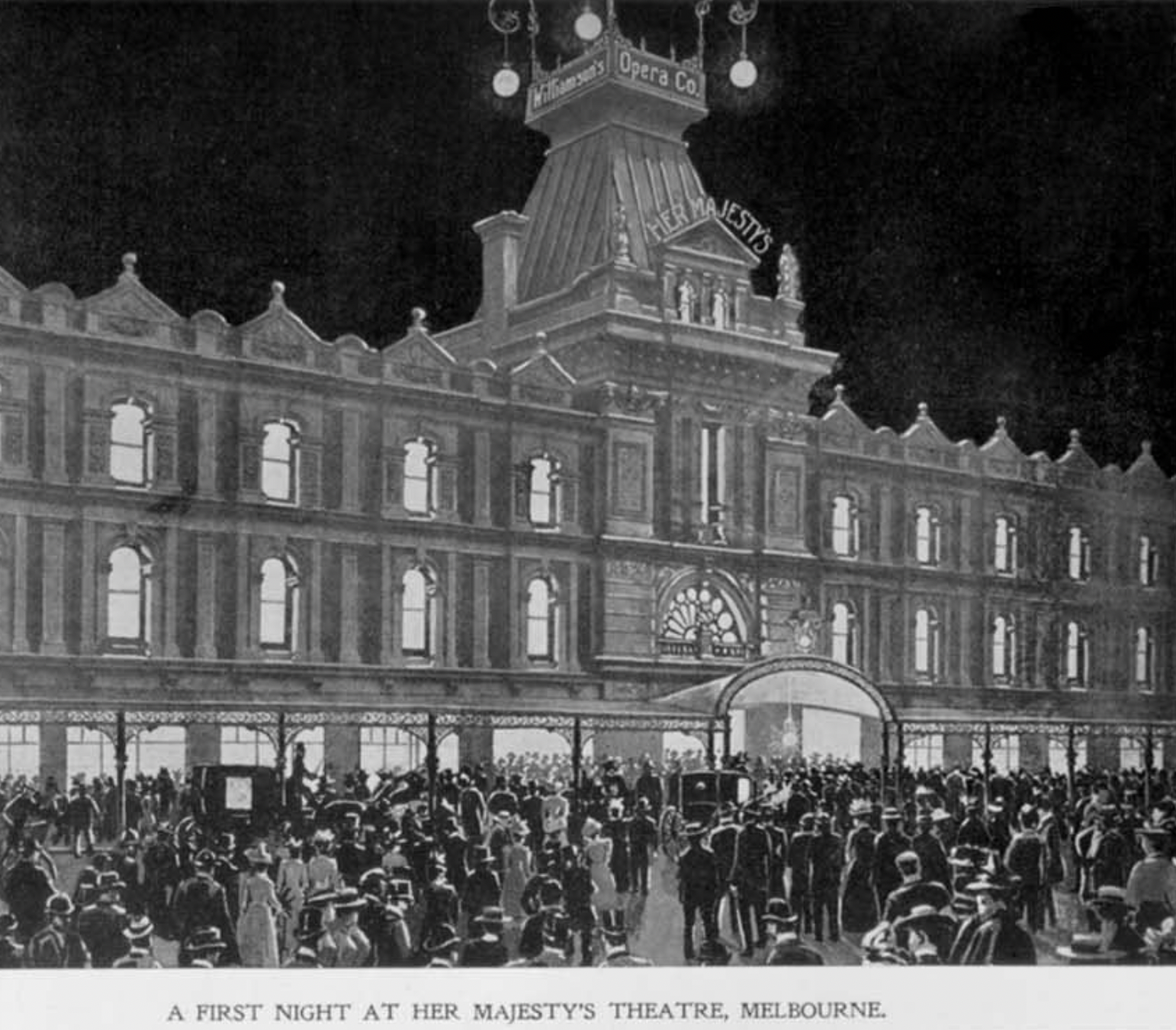 The theatre complex underwent its first major expansion in 1902 – 1904, with the construction of three new buildings along the north side of the theatre. Also designed by William Pitt, these brick buildings were each designed to accommodate specific production activities. The scene dock was constructed in 1902. The three-storey dressing room building dates from mid 1904. The paint frame building dates from late 1904; it contained spaces for painting scenery backdrops, with special machinery for raising and lowering the canvasses. All three of these buildings are still part of the theatre complex. Sometime in the 1920s, a three storey brick building was constructed in the north-west corner of the site. It was used mainly for storage of sets, props, wardrobe and other backstage items. This building, on Cohen Place, now houses the Chinese Museum.

Further works were carried out in 1911. Dame Nellie Melba had famously complained in 1909 that the auditorium’s acoustics were ‘dead’; she wasn’t performing at the theatre but tested the sound privately. As a result, modifications were made to the auditorium and proscenium in 1911 to remedy this. Melba finally made her Australian opera debut at the theatre in November 1911.

J C Williamson died in 1913 but his company purchased the theatre outright in 1915. It was the headquarters of the JCW empire until 1978. Many of the productions staged by Williamsons were built at Her Majesty’s and had their Australian premieres here before touring. At its height, Williamsons owned and operated nine theatres in Australia and New Zealand and was the largest theatrical entrepreneur in the world.

The early decades of the 20th century were a period in which live theatre was eclipsed by cinema as popular entertainment. Through the 1910s and 1920s, the theatre continued to operate as one of J C Williamson’s main venues for Gilbert and Sullivan operettas and musical comedies. Melba returned to the theatre for a season in 1924 and Anna Pavlova appeared in 1926 and 1929. Melba’s final stage appearance was at the theatre on 27 September 1928.

In 1924, the name was changed to His Majesty’s Theatre. It had remained Her Majesty’s following the death of Queen Victoria in 1901, even though a king was on the throne from that time.

Major works carried out in the 1920s began with modifications to the foyers by Pitt and Albion Walkley in 1920. In 1926, a new cantilevered verandah along the Exhibition and Little Bourke Street sides of the building was erected. This was lined with pressed metal sheeting and featured an illuminated leaded glass sign in the central section along Exhibition Street. It replaced the earlier cast iron verandah. Also occurring in the late 1920s was the remodelling to the ground floor facade to Exhibition Street, under the supervision of Walkley. This work included the introduction of new entrances with elaborate doors and extensive use of terracotta tiling. Although the configuration is now different, the external doors and wall finishes fitted then were the same as they are today. 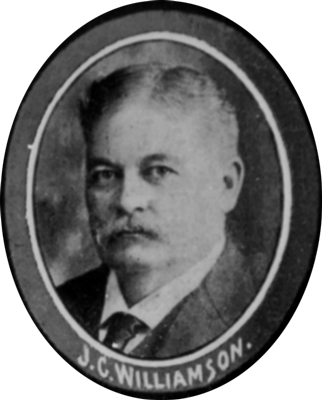 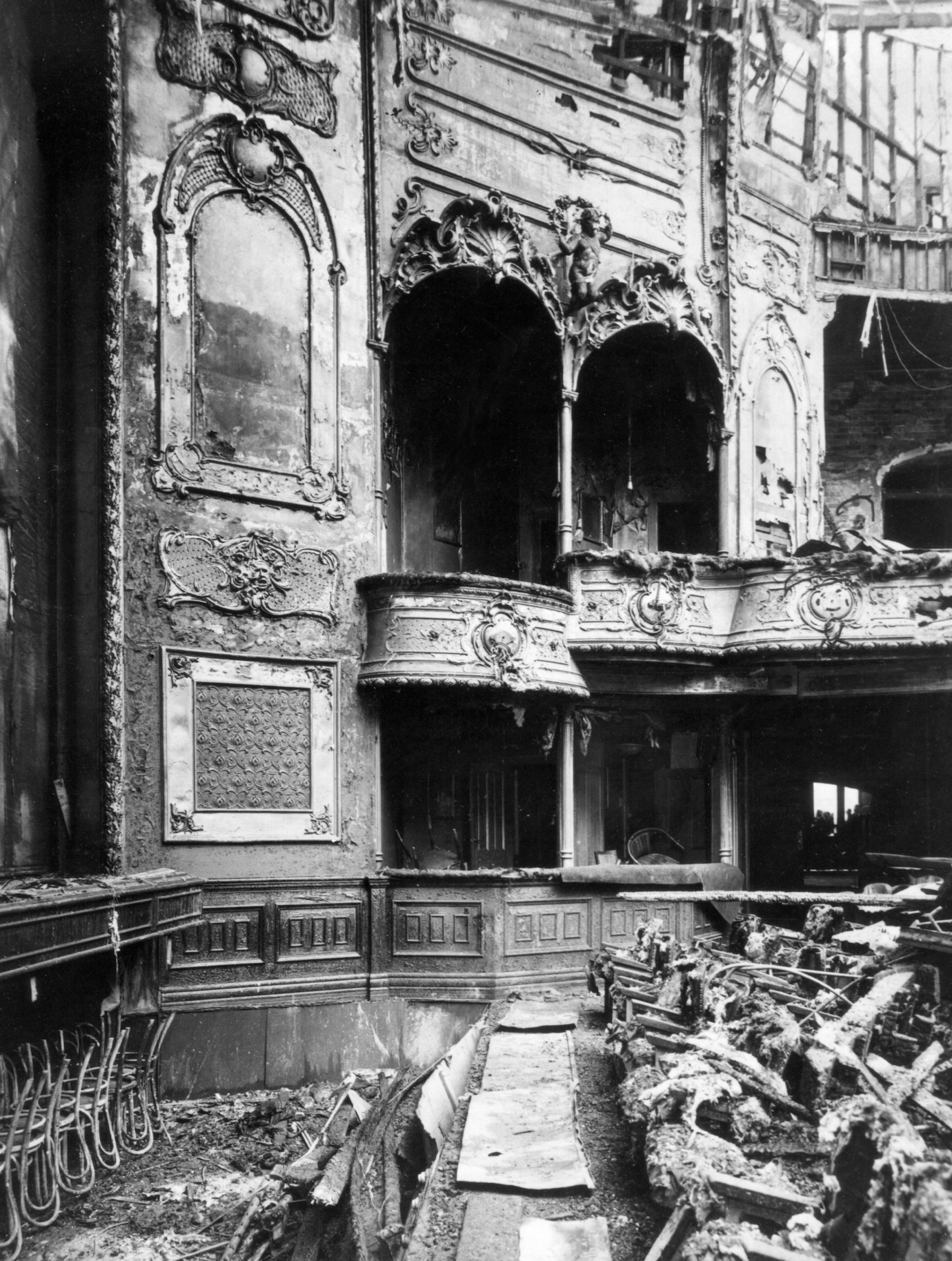 Early in the morning of 25 October 1929, a fire broke out in the main auditorium of His Majesty’s. For a theatre, such a fire was not an unusual event. Melbourne’s theatres seemed particularly susceptible to fire, with the majority thought to have succumbed during the nineteenth century. It was noted in The Argus that since 1901, 19 small fires had broken out in various parts of His Majesty’s. The extent of the damage was limited by automatic sprinklers and a fire proof curtain at the front of the stage. While the fire devastated the interior of the auditorium, the structure of the building remained intact, allowing for the interior to be rebuilt inside the shell of the 1886 building. A company spokesman indicated that rebuilding would take at least six months, but it eventually took five years, progress of the works presumably held up by the economic uncertainty of the great depression. During the interim, the stage area was used as a movie studio by the comedian Pat Hanna and also by FW Thring’s company Efftee Films. Radio stations 3AR and 3AW also broadcast from rooms in the theatre.

The interior was finally reinstated in 1934 in works carried out by architects Charles Hollinshed and Albion Walkley, with builders Hansen and Yuncken. Both architects for the 1930s works were proven specialists in theatre and cinema design. Albion Walkley had worked for many years with William Pitt and had designed the extensive work on Her Majesty’s in the 1920s. His partner for the 1934 works, Charles Hollinshed, was also a theatre and cinema specialist of some note. He completed a number of commissions in the 1920s and early to mid 1930s, including the Comedy Theatre in 1928. Although there were some minor interior elements remaining intact after the fire, the architects chose to decorate the auditorium and foyers in a contemporary Art Deco / Moderne style rather than attempt to restore the nineteenth century fabric. The auditorium was narrowed, to give better sight lines to the stage and a greater feeling of intimacy. The seating accommodation was reduced to 1,800. 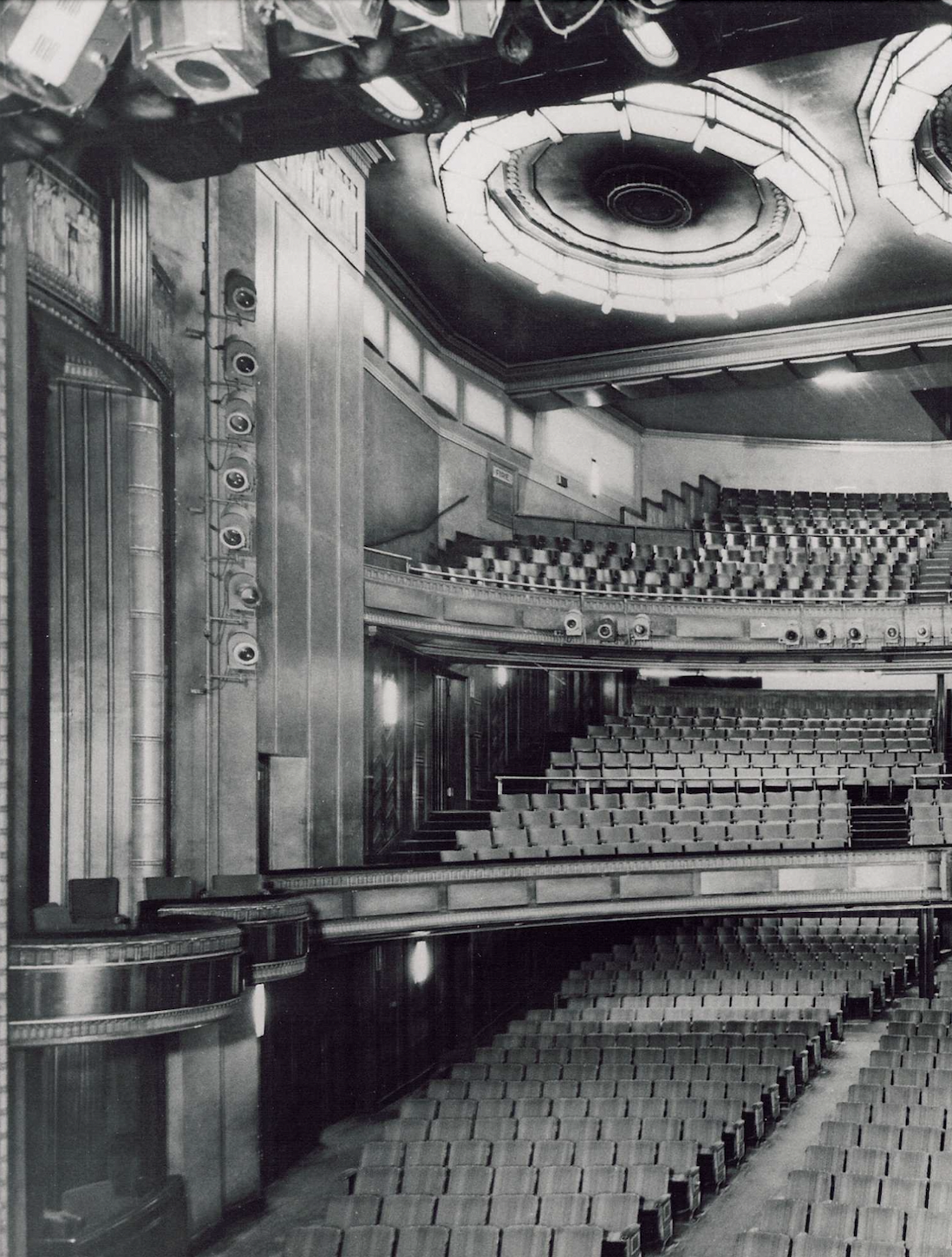 At ground floor level the facade was substantially modified. While the use of terracotta cladding first introduced in the late 20s was continued, the arrangement of doors, windows, shopfronts and the like was altered both on Exhibition Street and Little Bourke Street. The theatre reopened on 28 July 1934, the renovation having cost £60,000.

The external modifications that have occurred since 1934 have been comparatively minor. By the late 1930s, the existing neon sign on the Exhibition Street facade was installed. Around the mid 1960s, the leadlight sign in the 1926 verandah was removed and the original pressed metal lining was replaced. At ground floor level, the shop space in the south-east corner of the building appears to have been occupied by a sweets shop from 1934 until at least the late 1960s. By the 1980s it had been converted to a bar. 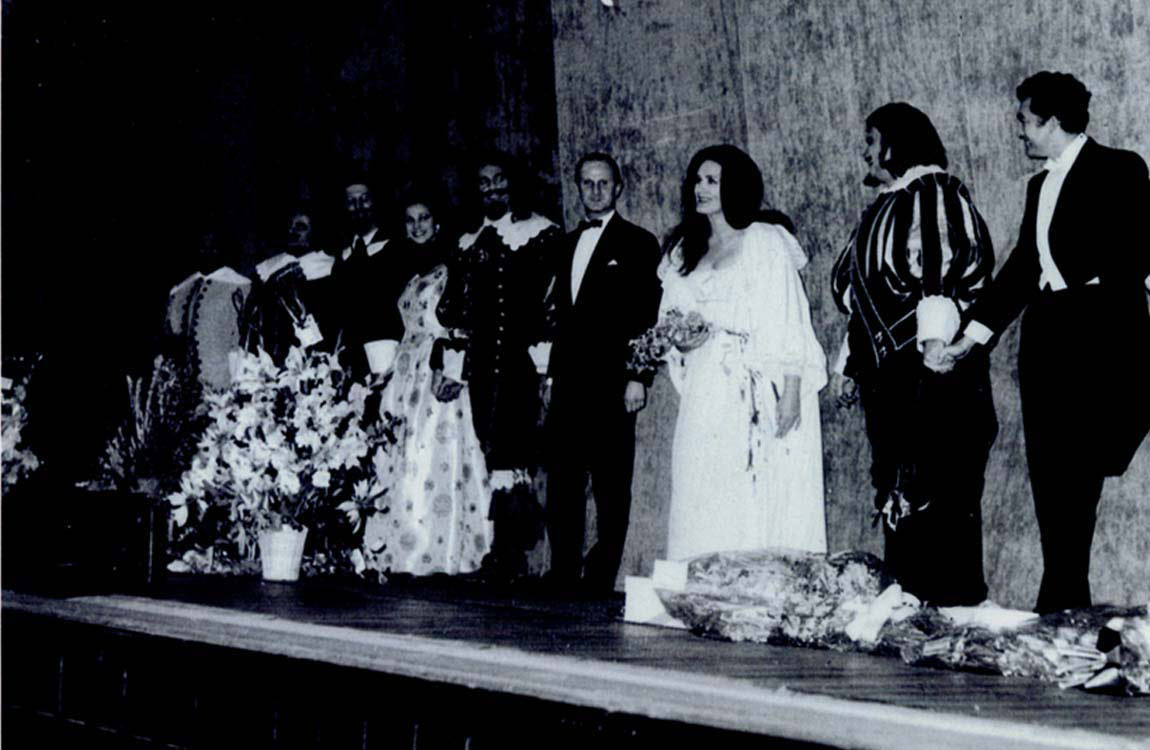 In 1965, Williamsons revived the tradition established with the Melba Williamson Opera Seasons of the 1920s with the Sutherland Williamson Grand Opera Season. This heralded the return to Australia of Joan Sutherland, by then an international opera superstar, after she left Australia for London in 1949. The season also featured early performances by a 29 year old Luciano Pavarotti. 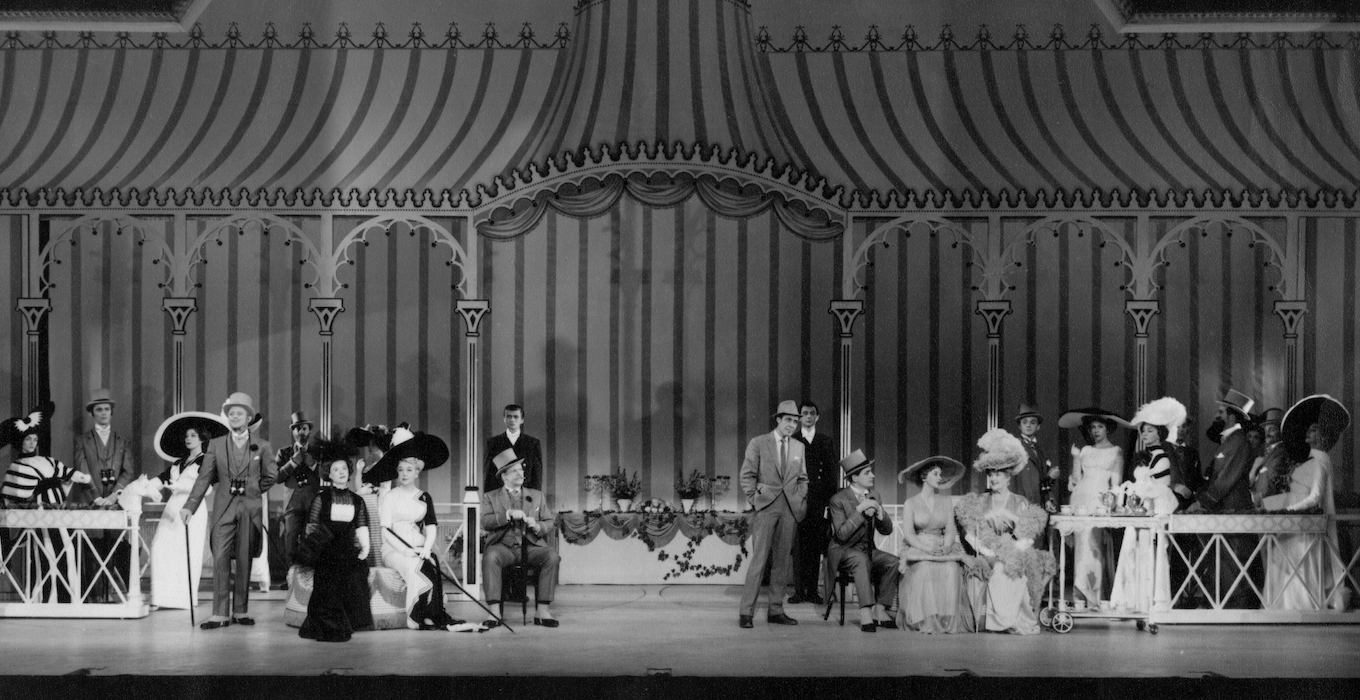 Other performance highlights include My Fair Lady in 1959, which ran for 18 months in Melbourne, a record not broken until Phantom of the Opera in the 1990s. Through the second half of the 20th Century, musicals became the most popular form of live theatre and over 100 have been staged at Her Majesty’s. 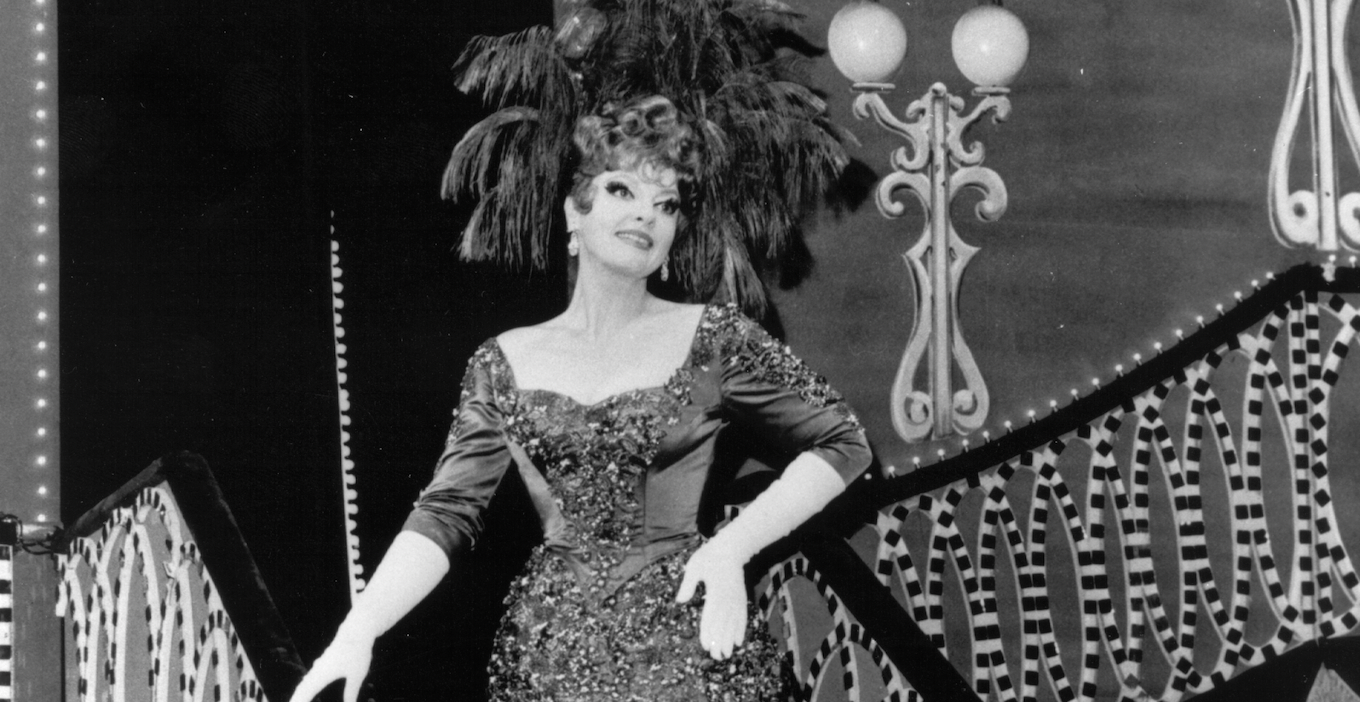 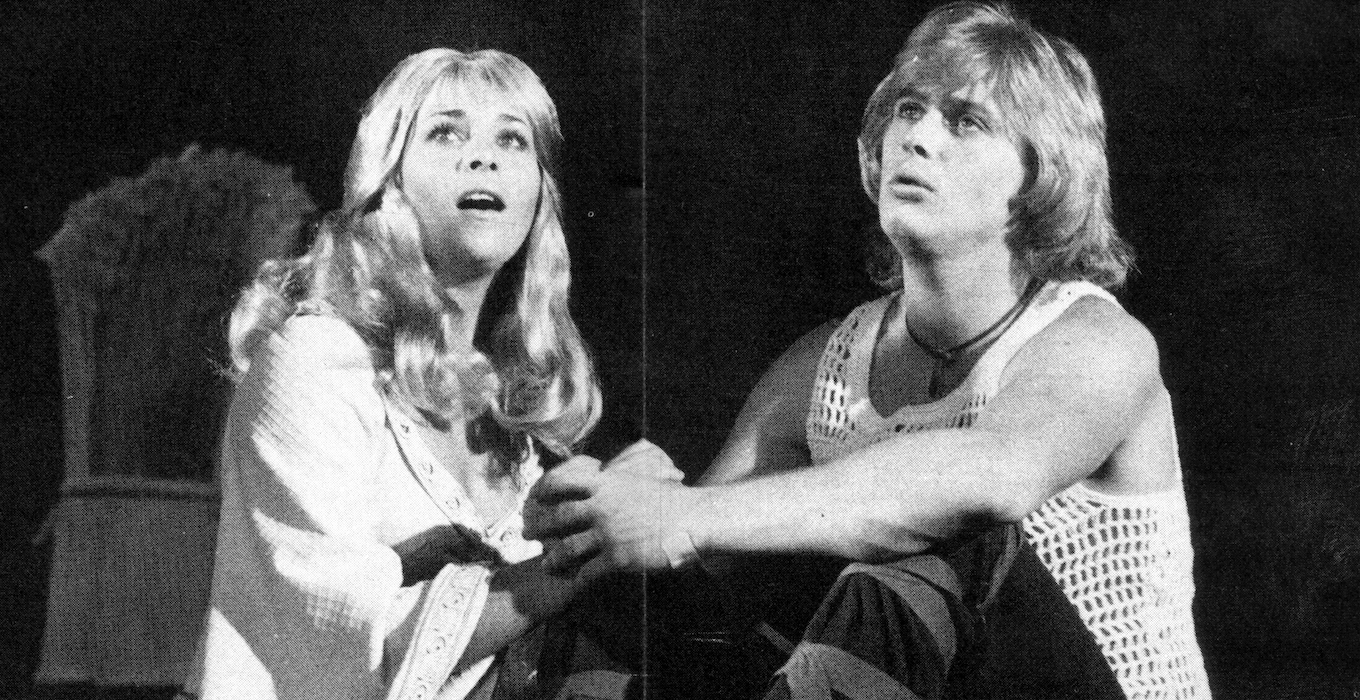 The turn of the decade saw a hugely successful return season of My Fair Lady (1970) before launching into the next phase of modern musicals – with Pippin (1974), Gypsy (1975) and The Wiz (1976) all taking their place in the history of Her Majesty’s Theatre.

Her Majesty’s Theatre was sold to Gabriel Rose in May 1978 after almost 80 years of association with the J C Williamson organisation. In 1987, a number of temporary alterations were made to the interior of the auditorium in order to accommodate the production of the musical Cats. All alterations made were reinstated in late 1988 at the end of the season.

In 1986, in the year of her 100th anniversary, Her Majesty’s was classified by the National Trust and listed on the Victorian Heritage Register. 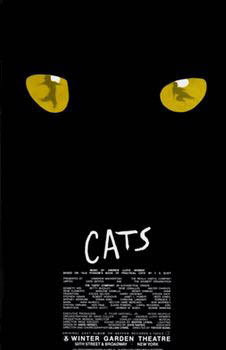 In June 2000, Mike Walsh purchased the theatre. Major renovations occurred over the next two years. The stage house was completely demolished and rebuilt with technical facilities that now allow the theatre to house the most demanding of modern productions. Modifications were made to the Dress Circle foyer to provide access to the Grand Circle. The building design from 1934 provided a separate entrance to the Grand Circle off Little Bourke Street, it being thought inappropriate for patrons sitting in the ‘gods’ to mingle with those in the more expensive seats. Dressing rooms were modernised and

new access was built to unload semi-trailers onto the stage. Further work continues around the building to improve facilities for patrons and performers alike. However, one of the charms of Her Majesty’s is that there are constant reminders both ‘front of house’ and backstage of the glorious history of the building, from the original 1886 Alexandra, to the establishment of the J C Williamson family in the early 1900s and the 1934 rebuild. Her Majesty’s is a true icon of Australian theatre, held in great affection by audiences and theatre workers alike. 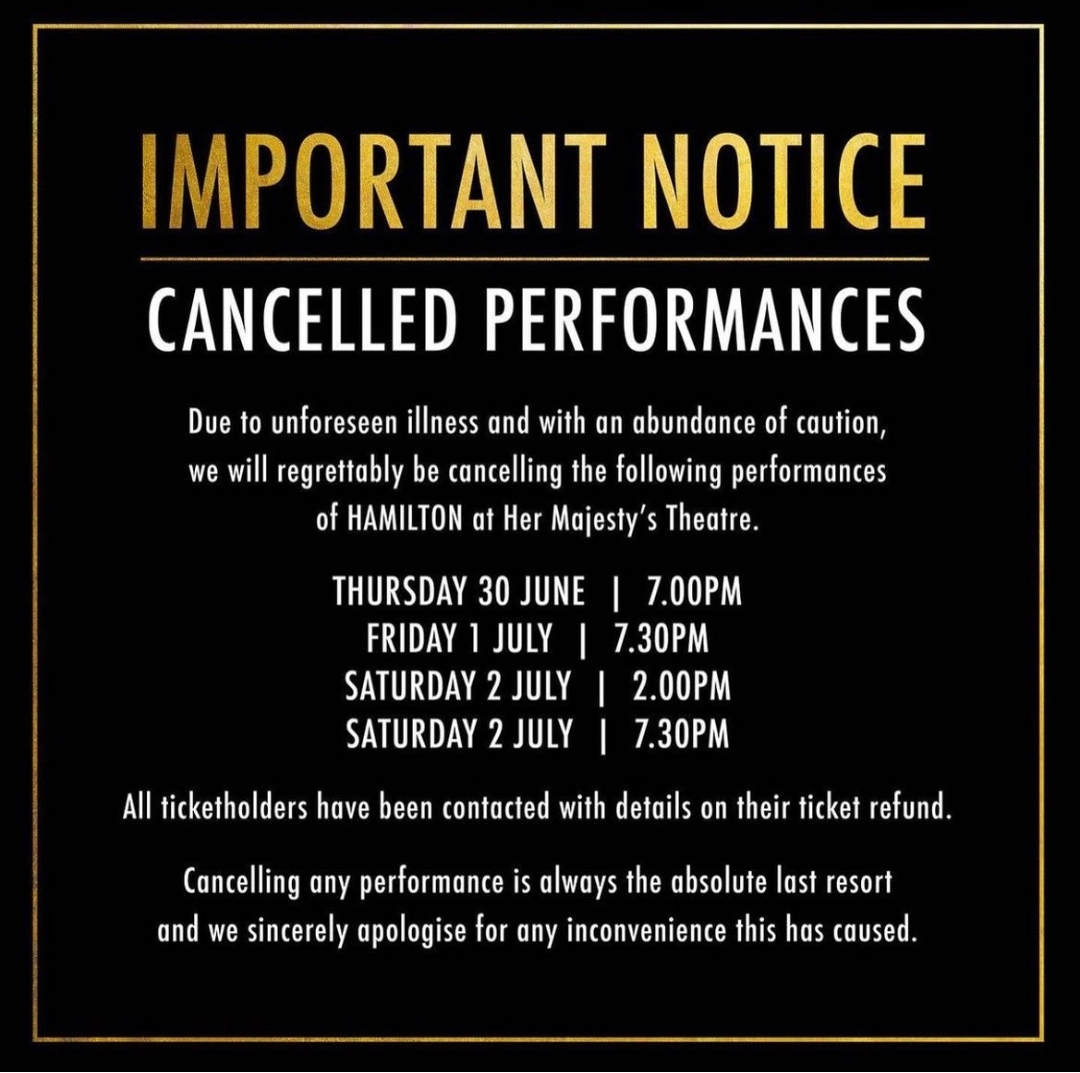